I had a great time at this little event and it was good prep for the Maine GIS User group’s Ignite meeting tonight. Hopefully I’ll be able to attend more stuff like this in the future. But, before then, I’d better get some materials together about Spatialite in return for the kind gentleman giving the spatial sql talk at my request (from the session board).

So what follows are my notes from Where Camp Boston 2011, and in generally chronological order. 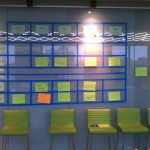 The session board at Where camp Boston 2011 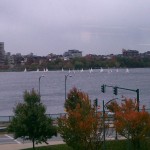 Crazy folks out sailing. When I left at 6pm-ish it was raining hard with snow mixed in and nearly dark out – they were still sailing. I take my hand off to them.

There was some talk about various projects using (1) publicly available historical data, or (2) data from a range of public, crowd-sourced, etc sources. There were also related discussions about collecting data for broad public use (use case 2). But all the discussions left out an important topic — which is a common malady in many discussions in the open, free, non-government (not necessarily related, but often coincident concepts) circles: documentation/metadata. I love open data. But when I use it, I need to have convenient, parse-able, understandable, hopefully standards-based information about this stuff I am about to use. It doesn’t have to be elaborate, but it needs to be present.

I wish the spatial community would agree on some simple, general, common approach to embed metadata right into the data so that the two could never be separated. When you create/maintain/manage/supply data, you’d better assume responsibility for the metadata and the data, as they should be two sides of the same coin. So, in your spatial DBs, maybe always include a table called.. DOCUMENTATION, link to the information_schema and create records contains Dublin Core RDF, or SOMETHING. Now I just need to follow my own advice…